It’s been 8 long months since I’ve been inspired to write a blog post.  I’ve been saying that I’ll get motivated and I’ll write, but it’s just not happened.  So many blocks, so many doubts… until I attended #PiedmontDLC hosted by Gaston County Schools last weekend.

I’ll be honest; I wasn’t looking forward to getting up early to drive down to Gastonia.  The school was a little over 90 minutes from my house.  I was excited to see my edu-friends from across the state.  I was honored to be asked to present at this event and looking forward to learning with others!  I was stoked that Dave Burgess, author of Teach Like A Pirate, would be in attendance giving the opening keynote and invitation only workshop (which I was invited to – woo hoo!), but even all of that wasn’t enough to make me jump out of bed on Saturday morning.  I even joked with an educator friend of mine that he had lost his educational “mojo” and we were going to spend the day at this conference getting it back.  I had no idea that the one who’d lost their “mojo” was me.

Upon arriving, I sought out the room I would be presenting in (I’m a planner like that), and began to prepare myself mentally to share with those who would attend my session.  I double-checked my materials and presentation, then meandered in to the opening session and keynote only a few minutes before it began after visiting with educator friends from across the state.  I had no expectations of the opening keynote, but I knew I had enjoyed the book Teach Like A Pirate when I read it several years ago.

In November 2014, I read the professional development book once on my Kindle upon the recommendation of a dear friend Lisa Milstead, agreed with the content that was written, and then moved on.  Then as a door prize at an edcamp in 2015, I won an autographed copy of the book, and read it again (careful not to mark in it because – hello – it was autographed!).  I was much more intrigued the second time I read it – I bought in to what this Pirate Dave fellow was selling.  I suggested a book study to my administrator who told me to run with it!  After contacting Dave and Shelley, we purchased books for each teacher in our school, including a copy that I marked up with highlighter and notes in the margins.  That year the theme in the media center was “ARGH you reading?” and every reading reward party was pirate themed (Pirate Party, Shipwreck Party, Sunken Treasures Party).  We even used the acronym PIRATE to encourage diversity in reading selection – Pick Interesting Reads And Try Everything.  I was energized!

Then… I fell overboard, so to speak.  I still agreed with the ideals and philosophy, the basic principles within the book, but didn’t practice them regularly.  I couldn’t find my enthusiasm, my passion.  I tried rereading the highlights and notes from the book study, and I tried following along with the #tlap conversation on Twitter.  I read a few of Pirate Dave’s blog posts, but I just couldn’t duplicate the energy I had found during my second reading of the book.

And then… Piedmont DLC happened.  The captain himself, Dave Burgess, shared his story.  I have never heard someone speak so fast in my life, with so much energy and enthusiasm, so much passion and excitement.  I was torn between rolling my eyes (hey, I teach middle school now – I’m a bit more cynical than I used to be) and being on the edge of my seat.  I was captivated by what Dave Burgess had to say.  I remembered reading the words, but this was a whole new experience.  In fact, I tweeted that I felt as though I’d been to church or something.  Here are some Twitter highlights from the keynote: 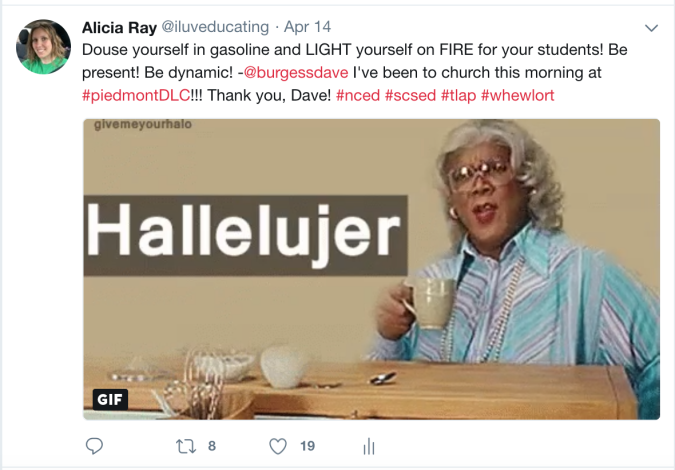 After sitting through the keynote, I was so pumped.  I was determined to be the magic in our media center.  The creativity workshop he did with us later in the day was just as fabulous, but the keynote is what got me amped up.  It reminded me of my why – why I got into teaching almost 13 years ago.  It reminded me what is important – and to remain optimistic and passionate about my work.

If you’ve ever seen Dave speak, you know what I’m talking about; you know that church of the south altar call, hallelujah feeling I experienced.  If you’ve not ever seen him speak, get to a Pirate Keynote ASAP!  As for me, I’ve got a renewed sense of passion and enthusiasm for the work I do.  I’m asking more creative questions as I plan for lessons with my students and workshops with my teachers.  I’m working harder to reach every kid, wanting to do everything I can to help them love school & engage in conversation.  I’m reflecting on the experiences from this year, and asking for student evaluations, to make next year better than ever before.  So, Dave Burgess, here’s to you.  Thanks for helping me find the mojo that I didn’t realize I’d lost and for helping me get my [educational] groove back! 4 thoughts on “How I Got My [Educational] Groove Back”