One of the most frequently asked questions….

Which do you recommend: Vive or Oculus?

I will admit up front that I have a pretty in-depth knowledge of the htc Vive and a pretty limited knowledge of the Oculus Rift.  Which means this post may be totally biased.  However, it’s been asked and I feel the need to share.  Because I know it can be argued, I’d like to point out in advance that there are other options, but right now, these are the front-runners.  I will not address those I haven’t personally tried.

In the beginning, it was Oculus.  I never had the pleasure of wearing the first Oculus, but I hear the motion sickness was something else.  My first experience was the htc Vive.  I was finally able to try out the new Oculus a couple weeks ago.  Here is my verdict. 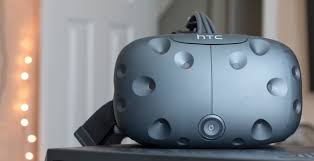 To me, the Vive is sturdier.  I’m using VR in education with 450 students and teachers and I’d like to know my headset isn’t going to break into pieces if a student hits it on accident.  I will say that the Oculus feels nice on because the headset is much lighter & it looks super sleek!  The Vive feels better on my face (using the included face cushion) and allowed less light in when adjusted.  The adjustments on the Vive are smoother and easier to handle than the Oculus.  The Oculus has a very small strip of velcro while the Vive has more substance to it.  I also like the headphones on the Oculus, which are adjustable.  However, the Vive has a port for headphones behind the head, and if the deluxe strap is ordered, it’s a moot point for Oculus.  So for overall headset, I’d have to choose the Vive. 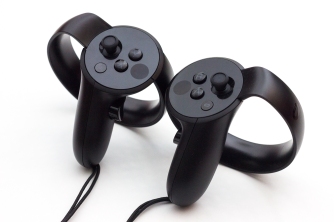 One of the coolest things about the high-end virtual reality equipment is the ability to have a room-scale experience.  This means that you are able to move about the virtual room in the same way that you move around a physical space, with your feet.  Prior to this, it was teleport only through a button on a controller, or the motion of your eyes or head in the headset.  The ability to do room-scale VR is what set Vive apart from their inception.  The idea that you could actually walk around was amazing.  Now Oculus has leveled the field in this respect by offered room-scale using base stations similar to Vive. However, having used both of these room-scale options, I like the Vive best in this regard.  Both the Vive & the Oculus offer their base stations/sensors with the original kit, but while two base stations are sufficient for a good room-scale experience with the Vive, the Oculus really needs three sensors to give you an equal experience.

I hate when people do that on one of these “which is better” posts, but honestly… I have to here.  I would be very interested to know the opinions of my peers on this.  The limited experiences I have in the Oculus were pretty consistent with what I had experienced in the Vive as far as graphics, response, etc.  I don’t really use Viveport (the Vive platform) nor the Oculus Home (Oculus platform).  If I based the choice on my limited experience in both platforms, I’d have to give it to Vive. The Oculus Home doesn’t allow you to move about, and I desperately want to move to change the radio and look around the patio you’re on, but I can’t (yet).  Instead, I typically use SteamVR and search for VR enabled experiences only.  I look forward to seeing the Home and Viveport evolve though, as there is quite a bit of change coming it seems.

So overall, I’d have to tell anyone who asks that I’d recommend the htc Vive over the Oculus Rift – for now.  With the constant changes and the incredible advances in both the look of VR and the experiences offered, there are only awesome things to come in the future of VR in education!