I gamified my Battle of the Books team using an online gamification platform.

I’m getting ready to upset a lot of people with my next statement.  I despise Battle of the Books. (waiting for the shame bell and rotten tomatoes….)  I realize some are 110% adamant about the benefits of Battle of the Books (BoB), but I struggle every year showing enthusiasm for something that I truly believe is detrimental to many students.  My reasons for not liking BoB? (So glad you asked!)

These are just a very few of my grievances.  Also in competition, we can always use the “we’re all winners” approach, but let’s be honest… unless you win & advance in a competition, you lose the competition.  Ever had to ride a bus back to school with a group of students who have spent all that time reading and studying mundane questions to have them come in last place?  Yeah – it’s not fun.

With all that said (my personal opinions), my district participates in BoB.  So… I participate in BoB.  Every year, I get a team together.  Every year, we continue the “read, answer questions, repeat” tradition.  Every year, I lose several students due to a lack of continued interest.  Last year, I decided to try something new.  I had dabbled in this idea while working at an elementary school, but really dove in this past year.  We didn’t practice from August until February.  You heard me.  No practice… My students had so many extracurricular activities, and those that really would have success comprehending the books were the students who were involved in Robotics, Drama, Debate, various athletics, etc, etc.  I agreed that if the students would read the books on their own and complete projects, we would meet virtually, with no physical practices until the final team of 12 was chosen – typically in late January, early February.

How did I ensure that the students were reading the books in the meanwhile?  I gamified Battle of the Books using Rezzly, formerly known as 3DGameLab.  This platform allows me to create quest chains in which students complete quests to earn badges, achievements, and rewards, which also equates to experience points (XP).  Each student who showed interest at the beginning of the year received the log-in information.  They learned about BoB through a quest, learned how to earn points through a quest, and learned how to earn additional XP through a quest.  For each book, there was a thought-provoking question and a short project (a service project, a research project, a collaborative project, etc) that must be completed in order to earn the badge and XP for that book.  I attempted to create questions that were similar to questions in ELA class, thus targeting specific skills as needed.  There were NO Accelerated Reader tests… I repeat, NO Accelerated Reader tests.  In order to keep the landing page from overwhelming students, they were presented with a quest called “Are You In” first.  This outlined the basic ideals behind BoB and presented them with the opportunity to opt out or opt in.  If they opt in, basic information on Rezzly was available as a quest, as well as a quest for their first book (usually a shorter book, or a book with a fairly straight forward project attached) as a starting point.  From there, it would spread as the branches of a tree, allowing the student more choice in selecting the next book.

Examples of quests can be seen below.

Various badges, achievements, and awards were given as additional forms of XP and bragging rights for those who earned them. 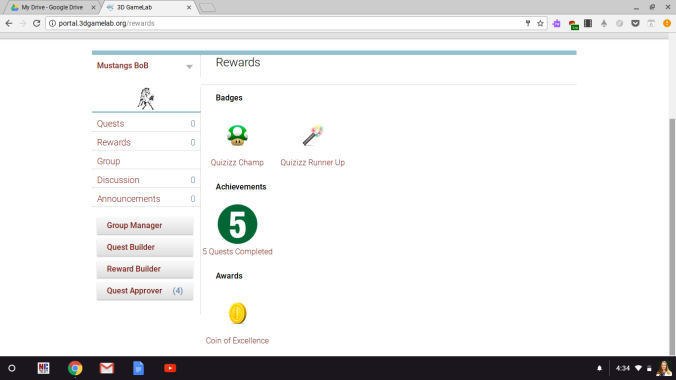 As students completed all 27 books, they earned a Bookworm badge with 200 additional XP.  Then they were presented with new quests that encouraged students to think of comparisons and contrasts between two or more books on the list and reflect on those similarities and differences.  Finally, the top 12 students were chosen in late January/early February.  These were chosen with as much objectivity as possible.  Basically, the 12 students with the highest XP were on the team and would attend competition.  The top 6 students were designated as mentors.

I must also mention that we had a guild (basically a virtual meeting space) available on our district LMS page.  This allowed us to have conversation in discussion boards, polls, and share our projects with one another on a virtual platform, which took the place of practice until the month before competition, freeing those students to participate in other extracurricular activities.  We met twice a week for the 4 weeks prior to competition to perfect the dynamics of the team and participate in mock battles.  After competition, we had a party, celebrating one another and what we had learned thanks to these books.  I guarantee you that my students learned more than there was a white house on the river, and they understood significance of a note being passed between these two girls.  We didn’t win the competition; they won so much more.

4 thoughts on “Battle of the Books – Gamified”