A dear friend of mine and my personal mentor in my new life as a “techbrarian”, Tonya (You should follow her on Twitter: @tonya_nc – she’s pretty amazing!), sent me a message a few days ago telling me about an addictive, simple game app.  It’s called 1010! and has the feel of Tetris.  The premise is simply to stack the blocks of various shapes into horizontal and vertical lines to eliminate them.  Of course I tried it out and BAM! It was 30 minutes later and I realized that I was slightly addicted.  Consider yourself warned. 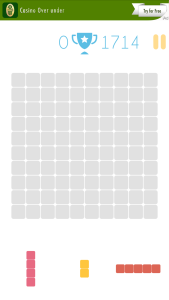 However, after playing a few times I put my educator hat on and saw it as an opportunity for game-based learning in the classroom.  Then I was able to chalk up all the time spent playing this little addictive devil to research… this is research of the best kind.  You see, the playing board is a 10 x 10 square which immediately triggers images of a hundreds board in all grade levels.  I can see allowing students to play for a bit, get the feel of the game, then a teacher can have the student identify the numbers that would be covered by their first three blocks given in the lower grades.  I can see setting up a tens frame and having the students fill up the tens frame within the 10 x 10 square, keeping track of the groups of ten they can create.  The goal of course would be to show that there are 10 ones in a tens frame and 10 tens in a hundreds board.  Maybe have a contest to see which student can clear ten rows, either horizontally or vertically, while counting by tens to 100.  Students can practice making groups of 10 by deciding how many more they need to add in order to clear that row or column, quickly connecting those obscure addition and subtraction fact families to ten.

In the upper grades, students can answer questions related to the perimeter and area of the figures they received, as well as the figures they create while playing.  See which student can create the largest area/perimeter and compare the area to the perimeter of each figure given.  The importance of learning that one “block” is one square unit is a vitally important stepping stone to higher level math skills in elementary school with the goal being to move from counting blocks to discover square units to actually calculating the area by multiplying length by width. 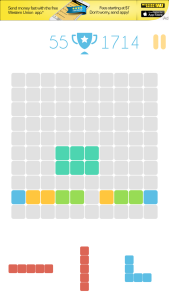 Want a real brainteaser?  Try to figure out how they keep score in this thing!

What do you think?  Go check it out, and comment below with other ideas for use in the classroom.  As always, using technology for the sake of using technology is useless, but being able to seamlessly integrate technology to garner student engagement and enthusiasm is priceless.