The latest phenomenon in social media is Periscope – a live video streaming service provided by Twitter.  I was instantly intrigued by the possibilities of use in the classroom, so I went straight to iTunes and downloaded the app.  Signing on via Twitter was quick and simple.  None of the people I follow on Twitter had live videos at the time I downloaded, so I checked out the map view to see where people were periscoping throughout the world.  Wow… they’re everywhere! 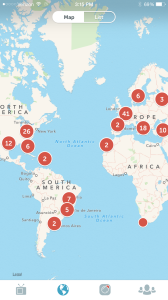 I figured I’d check out India, and lo and behold, there was a live streaming of someone taking a tour through the Taj Mahal!  I couldn’t understand a word they were saying since they were broadcasting in a different language, but to actually go on a tour from my couch was amazing!  How cool would that be for my students!!!  Tony Vincent (@tonyvincent) has created an awesome infographic giving The Scoop on Periscope.  It is a comprehensive look at Periscope and how to use it in the classroom.  There is a community of educators on #periscopeEDU who are gathering ideas for classroom use.  I’ve read ideas about using it after Mystery Skype, broadcasting live from edcamps and conferences, and chatting internationally as 21st century pen pals.   I also love Mike Paul’s How to Use Periscope for Education for tips to keep students safe.  Follow Mike at @mikepaul.  One important point to note: videos are only available for 24 hours, but you can save your own broadcasts under the settings feature to your camera roll.

So, what are your ideas?  How do you plan to use Periscope in your classroom?