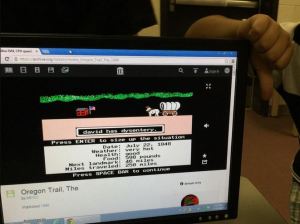 I feel as if I have done the world a huge favor today!  The next generation of students that come out of my school will know what The Oregon Trail is all about.  THE question was asked today… “What is dysentery?” I may or may not have given a fist pump in the air followed by the same explanation I received in elementary school. Okay, I did… and apparently dysentery sounds as disgusting now as it did over 20 years ago.

I was worried that the students would feel that the video game was outdated and boring.  I got a few laughs, especially after hearing the music and seeing the fonts.  However, once they started playing, they were hooked.  The room went from complete silence to uproar when someone died or got hurt back to complete silence.  It wasn’t until after the discussions in the room upon completion of the Trail that students realized that the banker, farmer, and carpenter each had different amounts of money given to them.  Typically the bankers made it to Oregon with the greatest success while the farmers didn’t make it at all.  We had just started an awesome discussion on what that meant for today’s economy and making good decisions in planning their future when they had to go back to their regular classes.  Nearly every student asked for the link so they could play at home.  I’m looking forward to hearing more about their adventures; hopefully they won’t include as much dysentery.